the breadmakers An early portrait of Pompeii’s bakers

An endless story, Pompeii attracts travelers to the ruins by Vesuvius – the world’s most dangerous volcano.

Buon  giorno, sei pronto!” This  is Signor  Gennaro, he’s an expert historian and  guide  on the ruins of Pompeii and has been leading visitors  here for the last 30 years. Dressed for the occasion and wearing comfortable walking shoes, sporty sunglasses and an  umbrella  to protect  against  the  shimmering sun, he begins our tour by handing me an elaborate  map of Pompeii. We enter  the ruins,  a UNESCO World Heritage  site at Porta  Marina and he quickly points out the Terme Suburane—a thermal bath on our left. We continue  along the via Marina  and instantly  you can see what life was like before  Vesuvius  violently  erupted on August 24, 79 A.D.

Until the  eruption, Pompeii was  a rich  and  prosperous hub  with traders,  merchants  and   travelers. It  was  also  a  cosmopolitan city populated with  a  sophisticated  society including the  Romans, who flocked here for their sun-drenched vacations.

After  Vesuvius  erupted,   the  Roman   city  remained  buried   and undiscovered  for almost  1,700 years, until  excavation began in 1748. The excavations that followed  and  continue today  provide insight into life during the Roman Empire.

We walk  along  the  via Abbondanza, an  organized  street  system lined with polygonal stone,  and  come to the Foro or city center.  It’s a  majestic  place  lined  with  columns  and  arches  leaving  you  only to imagine  its importance in ancient  times.  We pass  ancient  villas, temples, marketplaces and  bathhouses all exotically  named: Casa del Fauno (the  God  of dance), Casa  dell  Venere  in  Conchiglia (the  God of Venus  in her  sea shell)  and  the  Villa dei Misteri (villa of mysteries) depicting the magnitude of a culture that existed  over 2000 years ago.

Historians note  that Pompeii was founded around the sixth century by the  Osci  and  then captured by the  Romans in  80BC.  It took  its name from the Oscan  word pompe, for the number five, because it was composed of five hamlets.

“It was a bustling  city of lawyers, bankers,  doctors,  writers,  wine makers and  philosophers. People were  social,  liberated and  worked hard while  enjoying life. Eating, drinking, relaxing and  being entertained were very important in their culture,” Signor Gennaro explains.

“For example,  the  ancient  people  that  existed  here  started  their day  with  breakfast or jentaculum. The  upper class  ate  bread, honey, ricotta cheese, fruit,  bread and  olives, while honey  and  ricotta were fed to children for their nutritional value. At midday everyone stopped for lunch or  prandium (similar to  the  Italian word  pranzo) and  it  was  served  at a  thermopolium.”  His  Neapolitan dialect lets me know that he is from this part of southern Italy.

The   thermopoliums  were   snack   bars   where   lunch, snacks and wine were sold. The word thermopolium dates back to ancient Greek and translates to cook shop. Because lunches  were  quick,  light  and  always  eaten  outside  of home, the  thermopliums were a popular place  where everyone gathered. There were about 200 prosperous bar cafes of this kind  at the time  of the eruption.

As we walk along the via Fortuna by the Arco Onorario, Signor Gennaro  points  out the largest  thermopolium in the  ruins. “The  thermopoliums were  L  shape, built   of mortar and  stone and  had  a flagstone countertop. Built into  the  countertop  were  earthenware  storage   spaces called dolias where food was stored,” he says.

“A cauponae  was different  from  a thermopolium,”  he explains.  “They  were   l’osterias  that served   full  course cenam or dinner. Everyone, at home or eating out, dined at 6 p.m. and  the meal included six or seven courses starting with  soup  and  continuing with  meat,  fish,  vegetables and  fruits—both fresh  and  dried, olives, cheese  and  cake. Dessert or mensa seconda (literally meaning the second meal)  was  always  the  finale  and  included  sweet  cakes made with  anise  seed and  drenched in honey,  fruitcakes, puddings, eggs with sweet sauce, and sweet cheeses. Wine was always served  at each meal,” he adds.

The  poor  family’s food  was  different   and  included porridge,  barley,   millet  or  wheat  and   leftovers. Light soups made with lentils, beans or chickpeas were served for lunch, and  dinners included porridges or soups.

“Let’s  walk to the  Vicolo del Panottiere, the  street  of the  bread makers or panifici.” As we enter the  quarter immediately  you see dome-shaped ovens built into stone walls.  “The  ancients ate  bread at every  meal  and  it was plentiful. The panificio was a daily stop for everyone—rich or poor,” he says.

Bread  bakeries  had   their  own   mills,   ground  their grains,  baked  the  bread  and  sold  it  onsite.  Bread  was made with   flour   and   yeast and   baked in  large   round shapes that were scored  on top (before being  cooked) that marked it into  eight  equal  pieces.  This allowed the  loaves to bake  evenly without cracking open.  The markings also carved  out  equal  and  individual portions for  the  baker, who would later sell it to customers  lined up at the door. Families in general bought their bread and did not make it at home because not everyone had an oven. Bread bakers also stamped  their emblem  on each loaf guaranteeing its origin  and  tied it in a string  for easy carrying.  Focaccia and  pita  bread   were  also  popular.   The  lower  classes couldn’t  afford  bread  made  with  yeast, so they  bought and  ate  unleavened flatbread such  as  pita  bread. Bread dough was also fried  and  rubbed with  olive oil and  spices like the  pizzette of today.  Bread was a main staple in the food  culture. Pompeii had  thirty-three prosperous bread bakeries in operation at the time of the eruption. 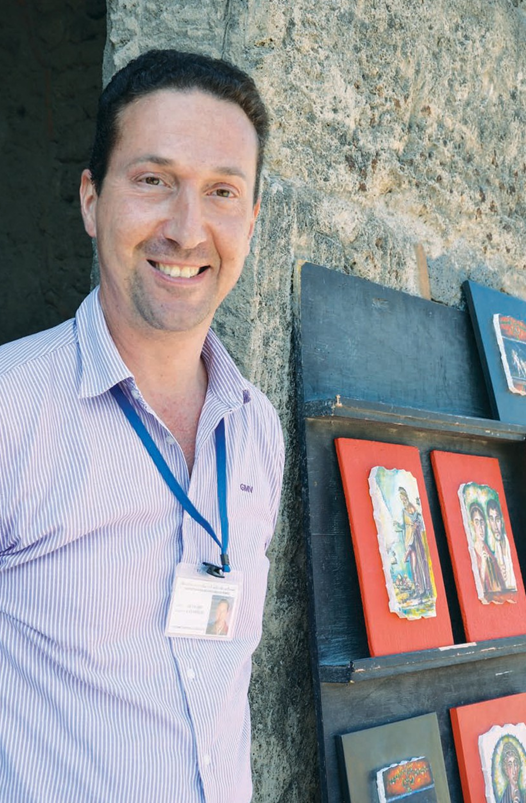 The  food of Pompeii  was very vibrant  thanks  to  the fertile slopes of Vesuvius and  its micro-climate. The sea air and  rain  kept  the  terrain moist and  the  mountains in the  backdrop held  the  moisture and  the  sun’s warmth in. Vegetables and  fruits  grew  abundantly and were consumed by all.

Vineyards   and   wine   production  made Pompeii  the most important commercial center for its wine  trade. Wine  was an important part of  the  food  culture, and drinking wine was a very democratic  practice enjoyed by all—women, slaves and the lower classes.  It was  also  part of their religion, as people  worshiped Bacchus, the god of wine, for healthy harvests.

The  wines  of  Campania   were  so  good that they were considered  the wines of the emperors. But  the  wine  of this  time  was not fermented in  the  same  way  it  is today  and was very strong. In order to correct the wine, it was boiled or blended  with sea water and was even mixed with honey and was called muslum. In  colder   months, the   wine   was seasoned with orange zest and spices, served warm and  was called  punch caldi.  Wine  was stored in amphoraes, which were tall, large earthenware vessels that were  tapered at the bottom.  Each  amphorae was stamped  with the wine maker’s emblem  insuring  its origin—very similar to the modern DOP  or domain of production that we know of today.

Pliny  the Elder, a historian and  author during   the  period  of  Pompeii’s  prosperity, wrote  extensively on wine in the Naturalis Historia.  There he names the grape varieties: Greco,  Fiano, Aglianico, Piedirosso, Sciascinoso,   Coda   di   Volpe,   Caprettona and  Falanghina. Modern-day historians confirmed  that  Pliny’s grapes were the same varieties that were  painted in  frescoes  that were found in Pompeii, based on their shape and  root  print. The  same  grape varieties are grown in Campania today.   “In Vino Veritas,” a  famous  quote  by Pliny,  translates to  “in wine there is truth,” Gennaro smiles.

The ancients were great fruit growers who also dried pears, figs, raisins, cherries, pears, grapes  and  apples  in  the  summer  to  carry them through the  winter, Gennaro says. “Dates were the only food that was imported,” he notes. Signor Gennaro recites just about every food imaginable  that you would find in their kitchen.

Another    important  cooking   ingredient was  garum.  It  was  a  spicy fish  sauce  that came   from   a  process  of  layering  fish  and salt and  putting it in the  sun  to dry for three months. Once fermented, the liquid that was extracted was called  garum. “People  then bought garum in  large  quantities that were made  by the  garum  artisans  in Pompeii;  it was a prosperous business. Garum was often mixed  with  wine  and  called  oenogarum, diluted with  water and  called  hydrogarum, and   blended  with   vinegar  and   called oxygarum,” he says.

With  the  city’s proximity to  the  sea, octopus, squid, mullet, sea  bass,  snails  and prawns  were eaten  in abundance. Fish  was grilled,   boiled, salted,  smoked, pickled, stuffed and even made into patties. Pork, poultry, hare,   pigeons,  duck,   figpeckers (a type of bird), flamingo and  ostrich were stuffed  or  cooked  with  prunes or  red  fruits and  seasoned with  honey.  Honey and  wine were used  to flavor food, while  salt was used to preserve it. Defrutum and  sapa,  cooked wines,  were  also used  in ancient recipes  as a sweetener.

The   concept   of   farm-raised   fish   was already  in practice  and  people  bred  fish in their water fountains  for cooking. Although some people raised their own food products, they also bought them at the macellum or market.

As our day in Pompeii comes to an end, we pass  the  Temple of Venus  before  heading to the  exit. It’s a majestic temple overlooking a field of rosemary. The Goddess of Venus  was considered mother of the  universe, love and beauty.  She was highly worshiped because she   was   born  from   the   sea,   and   the   sea allowed Pompeii’s rich trade. 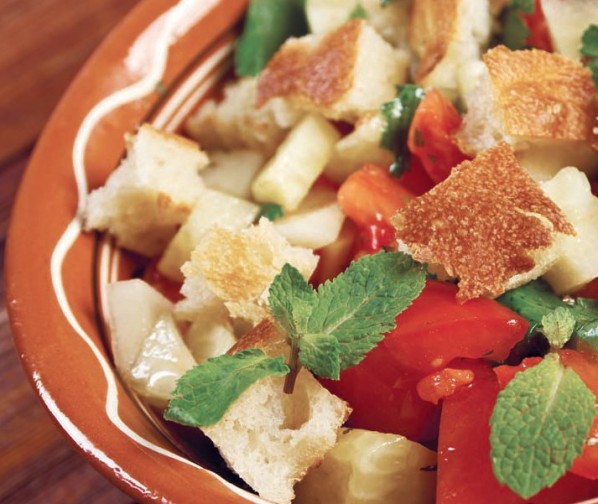 Sprigs of mint for decoration

Remove the crust from the bread and slice the loaf. Cut each slice diagonally to form triangles.

Mix equal amounts of vinegar and water and lightly moisten the bread. Arrange the slices in a shallow dish using a fan pattern. Mix with the grated cheese and tomatoes.

To make the dressing, crush the garlic and peppercorns using a mortar and pestle. Roughly chop the mint and coriander and

add to the mortar. Grind it into the garlic and peppercorns to make a rough paste. At this stage, adding a pinch of sea salt will aid with the maceration. Add the olive oil and white wine vinegar to the crushed mixture, mixing well. Pour over the bread slices, chill, and serve with mint.

Scald the lobster tails, extract the meat, and grind it. Beat the eggs, add them to

the lobster meat along with the garum and pepper. Mix well. Form small patties and fry them in a little olive oil.

Mix the ingredients together. Pour into a nonstick pan without any additional oil. Fry on both sides before placing in a serving dish. Pepper to taste on top before serving. 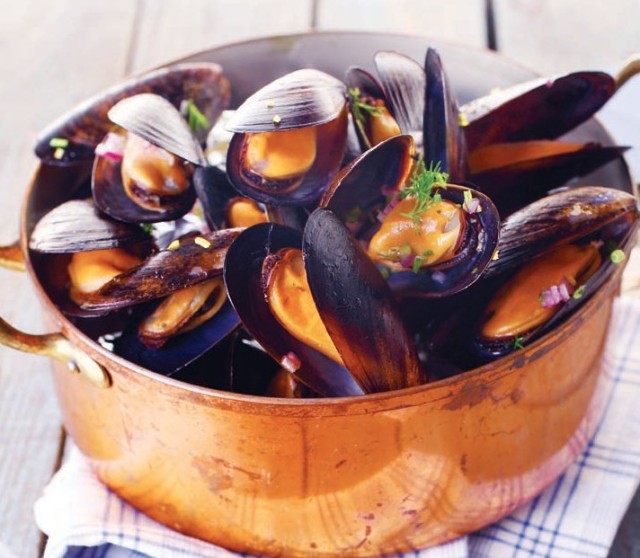 Wash the mussels thoroughly to remove the sand, then simmer them in just enough water to cover, along with the remaining ingredients. Simmer until all mussels have opened, about 5 to 10 minutes. Discard any unopened mussels. This dish is eaten with no further seasoning, as in the Neapolitan sauté of clams and mussels.

This article appeared in the January/February 2015  Tastes of Italia Magazine, the publication of http://www.cooking-vacations.com

Lauren Birmingham Piscitelli is founder and owner of Cooking Vacations Italy which specializes in culinary tours, hands-on cooking classes and cultural adventures in Italy. Be sure to visit their website at http://www.cooking-vacations.com.