The National Italian American Foundation (NIAF) is proud to have the Sant’Anna Institute – a study abroad and language course program in Sorrento, Italy – as a corporate sponsor of our foundation. Read on for a story from one of Sant’Anna’s Italian American students, Torri Dupuis from Worcester State University, who attended their summer 2017 program.

On June 25, 2017, I embarked on my journey to Spain and Sorrento, Italy. Just a day before my trip, my uncle mentioned that I might have possible family members in Artena, which is just a short train ride from Rome. After my uncle made a few calls, I was messaging with my new cousin, who happens to be my age, via Facebook Messenger.

While in Spain, I communicated back and forth with my cousin, Danny, who is the only

one out of the LARGE side of my Italian family that speaks any English. We instantly made plans to meet once I arrived in Italy, and counted down the days until we would be able to communicate face-to-face.  Finally, the weekend arrived. I hopped on a train from Sorrento to Naples, and then another from Naples to Rome, and got off along the way.

It was crazy – these people had no idea who I was, but only cared about one word: family. I was welcomed as if I had known them my whole life. Upon arriving I met Danny, his friend (who is now also my friend), Elisa (his sister), my cousin (also named Elisa), his brother, my cousin Cristian, their mother, my aunt, Cristina, and their father, Daniele (my uncle).

We spent the first few hours trying to communicate and understand each other. Although Google Translator was used a few times, we enjoyed every minute and laughed nearly the entire time. Later on that night, I met even more family members. My great-uncle cried as we were introduced. Unfortunately, there were too many of them to remember all their names. They were just as happy to meet me as I was to meet them. We hugged, laughed, and took all the pictures of this memorable evening.

Afterwards, a few of us went to the beautiful village of Artena; it was late, but they didn’t seem to care. they were content and I was too. They were excited to show me parts of their lives even if we had just the one weekend. I couldn’t believe the love that filled the entire house.

The next day, after visiting the beach with my cousins, we returned to the house to cook. It was so much fun, and I did as much I could without them having to help, so that I could engrave the recipe into my mind. Danny gave me directions and Aunt Cristina overlooked with a helping eye.

Our final result: Spaghetti Carbonara, which I MADE! It was better than any carbonara I have ever had. Of course, we went out for gelato afterwards (I’m pretty sure my family eats gelato AT LEAST twice a day).

Afterwards, Aunt Cristina showed me photo albums of times that meant so much to the family. They were inviting me into their life, and I was so grateful. 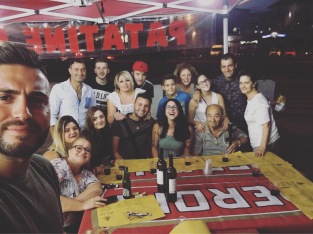 The final day eventually arrived. As we prepared for my departure, there were as many tears as there were hugs. I kissed Aunt Cristina, cousin Elisa, and Uncle Daniele goodbye. Then Cristian, Danny, Matteo (their friend) and Elisa, made our way to Sorrento. We spent the day together. My friends and I showed them the beautiful Regina Giovanna before making our way to the festival that was taking place in Sorrento that night, and later enjoyed a delicious dinner. We parted ways afterwards, which had us crying again.

I found a family and a home here in Italy, and a part of my heart will reside here as I head back home to the United States later this week. Saying goodbye was so very hard, but we have each other for the rest of our lives now. What happened to me and what I experienced is usually something you only ever hear about, and being able to live it myself was incredible. They taught me so much in such a short matter of time, and without having met my Italian family, my experience studying abroad in Italy just wouldn’t have been the same.