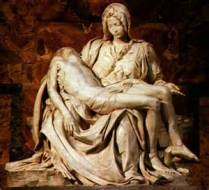 On April 4th 1964, the SS Cristoforo Colombo ocean liner carried the Pietà from the Vatican to the 1964-1965 New York World’s Fair at Flushing Meadows.  The Pietà was put in a crate that was filled with plastic foam, which was lowered onto a rubber base in the first class pool where the least damage was likely to happen to it. 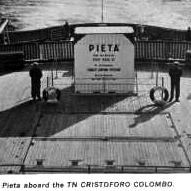 had been put in dry dock so that she would not move and jeopardize the crate and its content. Only easily removable snap hooks secured the crate so that it could be released easily in case of accident.

The thousands of persons visiting the Vatican Pavilion got a chance to see Michelangelo’s greatest artwork.  Not too many Americans took European Vacations in those days hence bringing the Pietà to New York, thanks to Cardinal Spellman, was truly a brilliant idea. 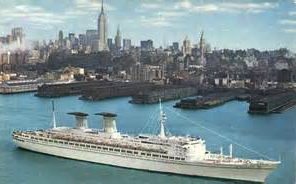 On November 3, 1965, I was on the first class deck of the Cristoforo Colombo and I watched the Pietà being reloaded for its return trip to Italy. Hardly anyone was around.

One thought came to my mind that in 1964-1965 the Italian Line had four ships in its fleet serving Italy; they were the Michelangelo, the Raffaello, the Leonardo Da Vinci and Cristoforo Colombo.