I would love to nominate my father, Tony Durpetti, owner + proprietor of legendary Chicago steakhouse Gene & Georgetti as an “Italian a Day” feature. Started in 1941 by Gene Michelotti (Durpetti’s father in law) and Alfredo “Georgetti” Federighi, Gene & Georgetti is a family owned and operated restaurant for almost 74 years.

Tony is a born and bred Chicagoan. He is a third generation Italian (his family originates from the Marche region). Born in 1944 to simple beginnings, Tony began working at the age of 9, and hasn’t looked back since. He served his country in the mid 1960’s, spending two years in Germany. In 1969, he married Marion Michelotti.

Tony began his career in radio advertising at that time with McGavern Guild radio, a national radio advertising firm, quickly moving through the ranks to Vice President in the early 80’s. In 1986, he started his own company, Durpetti & Associates and was continuously recognized as one of the top executives in his field. Durpetti & Associates grew to 12 offices nation wide and broke sales records that no one has matched since.

Upon his father in law’s death in 1989, Tony and his wife Marion purchased Gene & Georgetti from Ida, Gene’s wife so that it would remain in the family. After seven years of managing both the restaurant and his nationally recognized company, Durpetti retired from radio after 30 years to run the restaurant full time.

A dedicated philanthropist, Tony + his wife support numerous charities including Common Threads, Hephzibah Children’s House, and The Chicago Hunter Derby. He is an active support of his community and supports many civic organizations. He is especially proud of his Italian heritage, the facility tradition and entrepreneurial spirit that Gene & Georgetti is known for. He credits his mother for being a charitable inspiration from a very young age (she was known in their River North neighborhood for assisting newly arriving immigrants with the transition to Chicago, and constantly welcomed those who were hungry or in need of assistance into their home for meals). 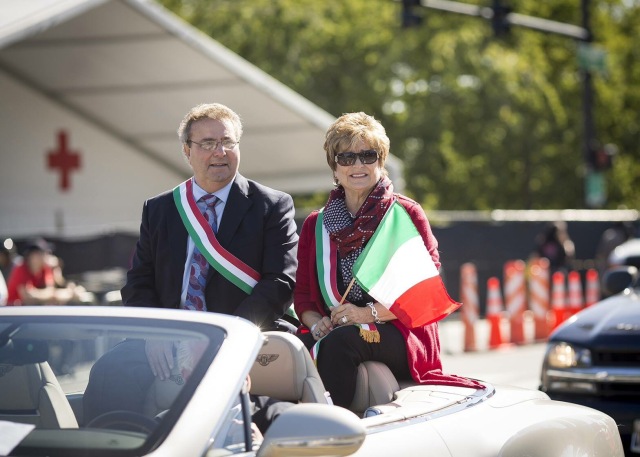 The joint civic committee of Italians Americans have recognized him as their humanitarian of the year, and he has served as the honorary chairman to Chicago’s annual Columbus Day parade. This week, the Cystic Fibrosis Foundation’s annual Grand Chef’s Gala awarded their inaugural Jean Banchet “Chicago Classic” lifetime achievement award to Gene & Georgetti.

Tony is all heart. He has integrity and kindness. He is a great leader, motivator and supporter of humanity. He is also a survivor and an eternal optimist – three years ago an infection of unknown origin settled in his lungs and left him on life support for nine days. After three months of therapy, he was up walking and constantly setting new goals to reach during his recovery process. He has an indomitable will,  and is one of the most generous spirits that I have had the privilege to know, and I believe he would do your “Italian A Day” series very proud!

For more information, please visit www.geneandgeorgetti.com (all of the history of the restaurant and our family is available there).